During Late Antiquity and throughout the Byzantine Empire textiles were a cherished and respected craft. Textiles were considered a major art form equalling that of sculpture, painting and architecture.

Textile art helped to define the wealth and power of the Byzantine Empire. Finely embroidered and colourful clothing in particular was used as an expression of an individual's wealth, status and power. Byzantine mosaics, such as one example from the Basilica of San Vitale in Ravenna, demonstrate just how elaborately decorative clothing was during this period.

A mosaic from Basilica of San Vitale, Ravenna, Italy.

Despite the prominence of Byzantine textiles, surviving examples are rare. The majority of textiles that have survived from this period come from Egypt, due to the hot and dry climate. Such examples are referred to as 'Coptic Textiles'.

The word 'Copt' derives from an Arabic corruption of the Greek word 'Aigyptos', and was used to describe the Christianised Egyptians.

The Copts possessed great skill as weavers and produced many artisans. Guilds and industries were founded in Alexandria, Akhim, Antinoë and the Fayum area.

During this period textiles were used primarily for clothing, but also as decorative domestic features such as wall hangings, curtains, shrouds, cushion covers and tablecloths.

The primary garment worn was the linen tunic. Decoration on linen tunics were often woven directly into the garment. This meant that when the garment became a little tired the embroidery could be transferred as an appliqué to a new tunic.

The surviving Kallos Coptic textile panels offer a glimpse into the wonderful world of Byzantine fashion, and allow us to piece together how these items would have once looked. 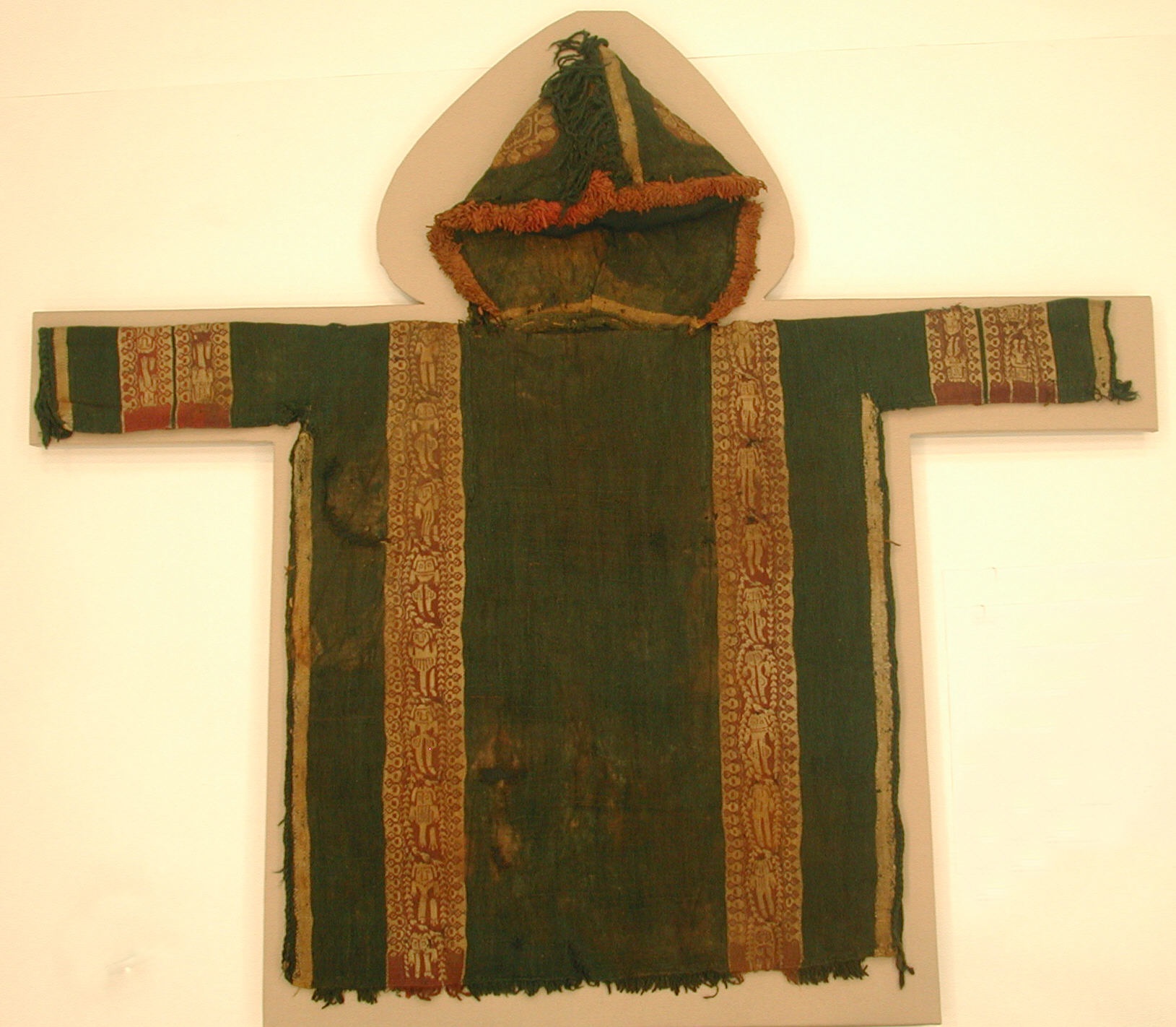 A child's tunic with a hood with decorative panels. Circa 600 - 900 AD
The Metropolitan Museum of Art, New York, Accession Number: 27.239

The designs for tapestry decorations were derived from Graeco-Roman art including mythological figures, human figures, animals, vegetation, and geometric motifs.

A popular decorative theme was that of Bacchic revelry, such as depicted in the two Kallos Coptic textiles above. The cult of Dionysus continued in popularity into early Byzantine times (4th-7th century), and both of the above panels probably depicted dancers involved in a Dionysiac procession.

Most Coptic textiles were made of linen and or wool. Linen had a very long history in Egypt, however outside of Egypt wool was the primary clothing material. Wool was easier to produce, provided better insulation and the material accepted dyes more easily.

It was not until the Greeks had conquered Egypt in the 4th century AD, and flocks of sheep were introduced to the land that wool began to gain acceptance in Egypt. From this point on linen and wool were often combined, which enabled weavers to produce more innovative textiles and designs.

Coptic textiles are known not only for the excellence of weaving technologies and skilled embroidery, but also for the beauty of colours used. Due to Byzantine influence, Coptic textiles gradually became more brilliant and colourful. The colours found on textiles were produced mainly from sources found in nature.

Blues were created using indigo and woad; reds from madder root; browns from bark or various fruits; purples from orchil; and greens from double dyeing weld and woad.