He is life's liberating force. He is release of limbs and communion through dance. He is laughter, and music in flutes. He is repose from all cares -- he is sleep! Euripides, Bacchae, lines 380-385

A Roman Carnelian intaglio of Dionysus
Skip to blog sidebar navigations
ROMAN CARNELIAN INTAGLIO OF A HEAD OF DIONYSUS, SET IN AN ANTIQUE GOLD RING Republican, circa 1st century AD

Jewellery is as old as mankind, with the earliest forms of personal ornamentation made from coloured stones, bone, shell and feathers.

The people of the ancient world wore jewellery for a myriad of reasons. These included the simply decorative, as an outward sign of wealth and status, and amuletic jewellery with apotropaic motivations.

Roman jewellery was certainly a status symbol, with wealthy men and women wearing engraved gemstones, often as signet rings to be used to seal important documents. Many ancient intaglios were mementoes however, and would have been given as gifts with a personal connection. Others were certainly intended to invoke the protection of the deity they depicted which is likely the case with this intaglio of Dionysus. 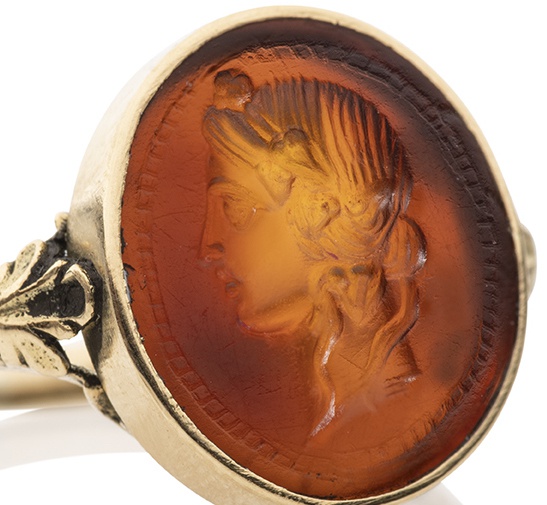 Dionysus / Bacchus was the Graeco-Roman god of fruitfulness, fertility, wine and pleasure. The gem shows the god as a young man with long flowing hair and vines and grapes in his hair. He was worshipped in the Roman Republic (originally just by women) through a mystery cult called the Bacchanalia. These rites were so associated with wine, intoxication and sexual promiscuity that in 186 BC the Roman Republic banned them. Livy, who was writing some 200 years after the event, offers a scandalized and extremely vivid account of the Bacchanalia.

“When wine had inflamed their feelings, and night and the mingling of the sexes and of different ages had extinguished all power of moral judgment, all sorts of corruption began to be practised, since each person had ready to hand the chance of gratifying the particular desire to which he was naturally inclined. The corruption was not confined to one kind of evil, the promiscuous violation of free men and of women; the cult was also a source of supply of false witnesses, forged documents and wills, and perjured evidence, dealing also in poisons and in wholesale murders among the devotees, and sometimes ensuring that not even the bodies were found for burial. Many such outrages were committed by craft, and even more by violence; and the violence was concealed because no cries for help could be heard against the shriekings, the banging of drums and the clashing of cymbals in the scene of debauchery and bloodshed.” Livy, The History of Rome, 39.8-9.

Despite such rumours the cult of Bacchus continued and the depictions of the god as a young man, as in this intaglio, were very popular in Imperial Rome. The youthful Dionysus appealed particularly to the wealthy citizens of Rome, who populated their gardens with Dionysian sculpture.

This intaglio is made of a translucent pale amber coloured carnelian. Carnelian was a popular hard stone in antiquity and varies in colour from the palest amber to a fiery orange-red. The very fine quality carving indicates that it would have been made by an accomplished jeweller who specialised in lapidary. The gem was carved in the later Roman Republic, the time of Cleopatra, Julius Caesar and Mark Antony.

The intaglio was re-set in the 19th century into an elegant wearable ring. The 18th and 19th centuries were a time of a resurgent interest in ancient gems with the great Bessborough, Marlborough, and Arundel collections being formed at that time.

Click here to view the ring being beautifully modelled by Beth!